Khai's Guide to the Amateur Decker

This is not an in-depth guide to decking. Rather, these are thoughts intended to help optimize the creation of a decker (whether as a primary or secondary role). For more detail, take a look at the other guides and especially the in-game help files.

IMPORTANT: If you read nothing else, understand that matrix hosts resist your actions by rolling against your detection factor (see: HELP DETECTION FACTOR), so it is highly recommended that you get this to 6. Also, most utility programs reduce the TNs (see: HELP TN) you roll against, so as a generalization, it is recommended that you obtain them at the highest rating you can, even though you might not be able to fit them all into your active memory at the same time (instead, unload and load programs as needed).

The programming suite, when installed on our computer (not in the cyberdeck!), adds dice to the programming step of program creation. Whether we start with a store-bought cyberdeck or aim to make our own custom deck, this is the first program we should create; it will help us in all our future programing, including making higher rating programming suites.

In general, we want to create programs in category (2) at the highest rating our deck can handle, as reducing TNs can often have a greater impact on our success in the Matrix than adding more dice. An exception is the sleaze program, which is averaged with our masking persona (round down) to form our “detection factor” (see: HELP DETECTION FACTOR). Because of SR3 dice probability distributions, a detection factor of 6 (e.g., sleaze 5 + masking 6) is just as effective as a detection factor of 7.

There are really only two relevant programs that fall in category (3): attack and medic. For the attack program, rating 6 is generally sufficient because IC don't appear to have armor. The rating of medic determines how many times we can run medic before needing to reload it.

Programs that belong to category (4), including personas (see: HELP PERSONAS), are only used when we're building our own custom deck. Store-bought decks are not compatible with custom built parts. To clarify a specific point of confusion: only store-bought persona programs work with store-bought decks, though they do have the minor benefit of not needing to be cooked.

A completed program has size equal to rating2 x multiplier, where the multiplier depends on what program. An incomplete program requires 10% more space.

When making programs, their maximum rating is equal to our Computer skill (exception: the Evaluate program is capped by our Data Brokerage skill). All the various Program Design skills are used in the design step, but for rating 6-8 programs, we can reasonably default to Intelligence without having much impact on our success rate. In order, the steps to produce a program are: create, design, program, cook (see: HELP CREATE, HELP DESIGN, HELP PROGRAM, HELP COOK).

In order to produce programs, we need a computer. Computers have some amount of active and storage memory (PROBE the computer to see these values). If our active memory is at least twice the size of a program, then we get a TN bonus on our programming test, which helps us get more successes, which in turn means we complete it faster (mechanically, programming time is divided by number of successes).

Example: a chargen Z4 has 500 Mp of active memory. So long as each of our programs require 250 Mp or less memory, the Z4 will give us the bonus to programming tests. The largest size multiplier is x3 for programs that belong to category (2) and x5 for programs that belong to category (3). A programming suite has multiplier x15. Thus, we can use a rating 4 programming suite and program anything in category (2) at rating 7 and anything in category (3) at rating 6. Conveniently, this is a good fit for maxing out a CMT Avatar. However, the Z4 also only has 500 Mp storage memory, so we'll only be able to keep a few programs installed on it at a time (see: HELP INSTALL, HELP UNINSTALL).

We also need a cooker to encode our programs onto chips. The rating of a cooker adds dice to our cook test, but note that the TN for cooking is only 4. If we have 6 dice (e.g., Computer Build and Repair 6 with a Sony Encoder I), we have a less than 2% chance to fail. With bonuses from cyberware/bioware and/or a cooker with rating higher than 0, our chance of failure is so much lower that it isn't really necessary to put effort into obtaining a rating 6 Hitachi RM-AX. As with programming, cooking time is divided by number of successes, though we only need to be present to start the cooking (we can go do other stuff while the cooker does its work).

Persona ratings are typically what hosts and IC will roll against. Because of the dice rulset, personas at rating 6 are ideal for the newbie decker (and because of opportunity costs, 6 can be better than 7). However, the total of our four persona programs can't exceed our MPCP rating x3. Because Evasion is only useful for initiating maneuvers (useful for hard targets) and defending against trace IC (NERP), we can do without it when we're just looking to harvest blue, green, and some orange hosts for paydata.

However, access to the hacking pool means that a custom MPCP 6 deck can often perform better than a CMT Avatar, even though the Avatar has a higher MPCP rating. The plot below shows a comparison between a CMT Avatar and a custom MPCP 6. Both deckers are assumed to have started with Computer 6 and have picked up all relevant cyberware and bioware. Because the decker with the custom MPCP 6 has spent significant time/effort in building their deck as well as programming rating 6 utilities, it is reasonable to assume that the decker with the CMT Avatar has also taken some effort to increase their computer skill to 7 and to upgrade their utility programs to rating 7 so as to maximize the benefit they get from their CMT Avatar's MPCP 7. The plot also assumes that both decks have detection factor = 6 and that the opposing Matrix Host has a security rating value equal to 2/3 (round down) of the targeted subsystem rating. The alert state is not taken into account, though an alerted host can be approximated by taking its subsystem rating as 2 points higher on the plot. 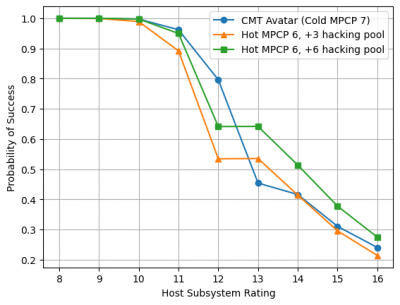 Intelligence contributes to our hacking pool, and if we didn't pick up the design skills, our design tests default to this attribute.

A datajack, because we can't jack-in without one.

A chipjack (any rating), chipjack expert driver III, and skillwires III or V will let us make use of activesofts, which can be used to cover all the design skills as well as any other skills that doesn't need to be maxed out (e.g. athletics, electronics, vehicle skills, and/or social skills). We choose rating III or V to match the activesofts available in chargen.

Cyberterminal Design and the five Program Design skills are optional for early deck-building and programming. Without these skills, we default to Intelligence for design tests, but if we picked up everything on the the highly recommended 'ware list, our likelihood of failure without these skills for rating 6-8 parts/programs is very small. These skills do make a significant difference for higher rating decks/programs, but we can pick them up later when we're actually thinking of upgrading.

All the highly recommended 'ware can be picked up with resources at priority B, and the skills at priority E, so we have quite a bit of room for the rest of the character. NOTE: because melee is only defended against by melee, it is a very good idea for all characters to pick up a melee skill. If we're using a firearm, we use clubs for melee defense. If we put a bayonet on the firearm, then we use polearms for melee defense.

WRT magical characters: picking up everthing on the highly recommended 'ware list means starting with magic 3. For mages, this means we'll want to grind paydata for at least a rating 3 power focus before we start spamming stunbolt 6. For adepts, it may be worth using those 3 power points for kinesics; we'll be lacking combat abilities until we get in a few addpoints and initiations, but we'll also be able to buy truck-loads of APDS ammo much earlier than any other character concept.

WRT riggers, each rating of a vehicle control rig reduces hacking pool. Having a rig also increases matrix TN by 1. Because program ratings directly reduce matrix TNs, this is really only a problem while our ratings are still low. One idea might be to start without a rig and pick one up in-game after we can upgrade to higher rating decks and programs.

Starting With a Custom Cyberdeck

We can't immediately begin building a custom deck on leaving chargen because we need to obtain a few things that are only available in-game:

Between these, we'll need around 36k nuyen to build a deck that can hunt for paydata. This can be covered by doing all the newbie Neophyte Guild autoruns, plus “idle nuyen” while programming and deck building, making it perfectly reasonable for a decker to start the game without having spent chargen resources on a store-bought cyberdeck. This assumes we picked up a Mitsuhama Z4 computer and a cooker in chargen. We should probably buy the optical chips first so we can get the cooking started as we complete each program. NOTE: Making the cyberdeck components will require the workshop and cyberdeck parts, as well as cooked programs for those parts that require them.

For the purpose of harvesting paydata, we want at least the following:

With a bit more nuyen, from paydata or otherwise, we can then add:

These parts can be useful, but are lower priority:

NOTE: The lack of an analyze program is acceptable because newbie hosts are common knowledge, there's no real penalty for attempting to decrypt or disarm paydata that turns out to not be encrypted or trapped, and because we don't have to dig around for “tricks” just yet. The lack of medic and lock-on will reduce the amount of time we can survive fighting IC, but that just means we need to log back in more often.

After the active memory upgrade so we can keep everything loaded, we add:

Except where otherwise noted, content on this wiki is licensed under the following license: CC Attribution-Share Alike 4.0 International